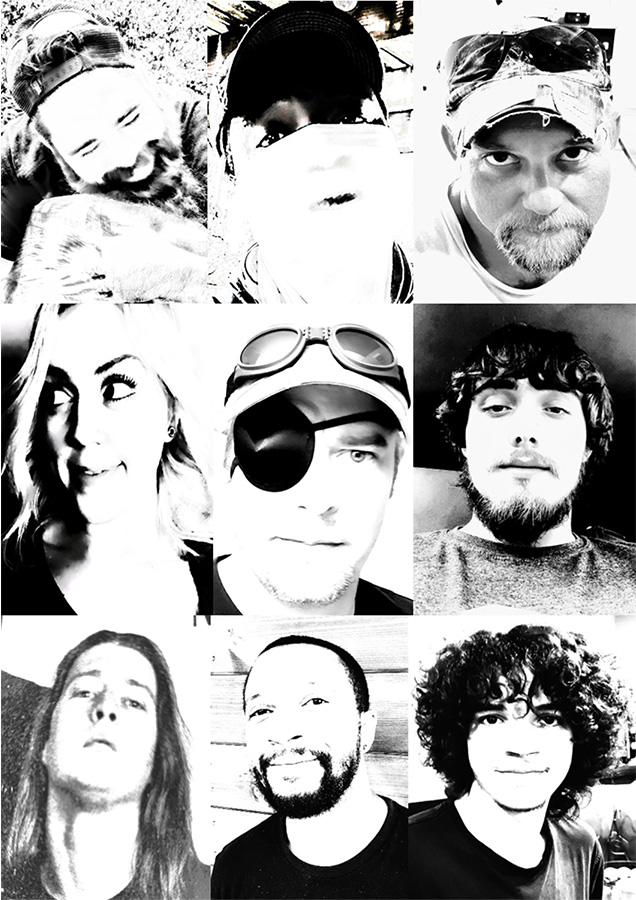 James Huff, the specialist and leader, the problem solver. James is neither warm nor cuddly, but he cuts through the noise to get to the brutally honest heart of the matter. He is trusted by clients for his direct, no BS, matter-of-fact methods and skill in delivering exactly what clients envision. James is the "Pull in case of emergency" lever, or maybe the "big red panic button" of specialist contractors (Think Nick Fury with a tool belt). With 24 years of experience in various aspects of business, construction, and custom artisan projects, he is the last person you will call, if not the first (because it will be done right the first time he does it). He performs the role of big brother and mentor to the crew and expects excellence from each of his team.

Jason Norfleet, the consummate perfectionist. Jason is the adopted brother of James for the last 23 years, ever since the pair both ran into a burning building in the fear that the other was inside. He is the guy you call when time doesn't matter, but the quality must be immaculate. His meticulousness is derived from a gamma radiation accident that rendered him unable to get anywhere on time, but his acquired powers of OCD granted him the ability to apply a finish to any surface of any type, the quality of which mimics the divine. Jason is beloved by all except James' watch, which is his mortal enemy. His warm nature and genuine demeanor are only matched by his knowledge of restoration and mitigation best practices and memorization of material data sheets of paint and finish products.

Chance Risner, the tree hugging beard wizard. In 2018, while adventuring in the tunnels of Church Road, James found Chance in a pot of pot at the end of a solid emerald rainbow, lovingly hugging a rainbow poplar tree. At first, James thought he was a leprechaun and he was unsure of the magical creature and its powers of beard magic, but decided to take him under his wing. Chance has been a stalwart ally to James and the mission ever since, and has become James' #1. The beard magic from whence Chance was spawned gives him incredible powers of creative vision, superhuman strength, and the special ability to induce a condition in James known as "facepalm". Chance, in order to maintain his powers, must consume copious amounts of food to satiate his voracious appetite, which is only exacerbated by his special green beard magic herbs. Chance is among the most trusted of the team in all matters of construction and perfects his talents through the use of TikTok, YouTube, and arguing with James about better ways to do things (he is sometimes right). Chance's happy and caring attitude is refreshing to clients and the rest of the team, and his skills are constantly developing. He is a magical force, in and of himself.

Leanne, the mirror dimension organizationalist. Unlike the other members of the team, Leanne is an enigma. She was discovered by Chance while on a spirit journey, long ago, in a cantina on a planet Called Rookies, in a far away galaxy. She was at the time, an adventurer, searching for the meaning of life, the universe, and everything. She called herself a hitchhiker, but had her own transportation, an interdimensional motorcycle she affectionately referred to as "42". Chance invited her to join the team, where she desired to learn the art of custom woodworking and fine finishing secrets. While her motivations for acquiring this knowledge are, as of yet, unknown, she has proven to be a master of jobsite planning and organization, and an unwavering apprentice. She possesses the power to rapidly learn skills and techniques from the team and to replicate those skills expertly after being shown only once. In addition to her taskmaster like abilities of mimicry she also has a superhuman memory with the uncanny ability to know exactly where everything is. Her powers also include a magical spell to ensure that the team receives the newest and cleanest porta-pottys. Her demeanor may seem distant and aloof, but in actuality, she is watching and learning everything. She is, daily, becoming a more powerful member of the team.

Happy, the Glass Hammer. Happy is to the team as Jubilee is to the X-Men. He was introduced to James by the master of ceremonies of the Cantina on the planet Rookies. Hailing from the Neckropolis system, his true name is a jumble of sounds which cannot be remembered once heard by human ears. Therefore, James dubbed him "Happy" on their first meeting and the name remains. Happy is the wielder of musical talents that mesmerize lesser beings, a ludicrously long Sampson-like mane of hair, and an extremely powerful neck which he displays as a tribute to his Neckropolian culture. None of these talents are, however, useful in any way on a job site. What is useful is that Happy tends to keep a smile on the faces of others with his rather "happy" personality, except James... he doesn't know how to smile. He also eagerly seeks to learn more from each member of the team and is asking all the right questions along the way. The entire team is happy to have Happy, and will continue to grow happier as they happily help to develop his skills.

While in The Ether, battling to free his most beloved Money from the clutches of the inter-dimensional beast known as "Escrow", James encountered Dash, the Ultra-sonic and agreeable speedster. Dash presented James with new weapons to combat the intermittent periods without oxygen experienced when battling Escrow. At speeds lightning would be envious of, Dash formulated a strategy and found the best possible scenario to assist James in defeated his foe, ensuring that Escrow would never be of danger to The Super-Secret Super League of Extraordinary Contractors again. Dash possesses the powers of Ultra-sonic speed and thought, and a masterful command of the inner workings of the financial dimension, known as The Ether. He is, in fact, so fast that the other members of the League are convinced that Dash is merely a figment of James' imagination, since he moves too quickly for them to have ever seen him. While his presence in the League is honorary, his contributions do not go unnoticed. James counts him as an ally, and the League is grateful to have his assistance.

Organized, resourceful, meticulous, punctual, professional... the list of qualities this enigmatic man possesses goes on. James met Damian while searching for qualified candidates to join the Super-Secret Super League of Extraordinary Contractors. A brief dance battle ensued, in which both men merely stoically stood still and stared at each other (because dance battles are obviously beneath any self-respecting man). He surprised James immediately with his near instant access to any tool (like they were hidden in a utility belt) and masterful proficiency (like he spent years honing his ninja-like skills) and creative problem solving (like he could be the world's greatest detective). James has his suspicions about Damian's origins, but the only logical conclusion is that Mr. Knight is, in fact, The Dark Knight himself. With a name as cool as Damian Knight, how could he not be Batman? Damian is an asset, and a powerful one. As a prime lieutenant in the Super-Secret Super League of Extraordinary Contractors, Damian has embraced his leadership role alongside James and the Magical Beard Wizard, Chance. In addition, he also brought a sidekick with him to The League. Any clients lucky enough to have Damian on their project should quickly notice and appreciate his qualities. He is the contractor we need, and the one we deserve.

David is the son of Damian Knight, and no less resourceful than his father. While young, he is ambitious and strives to emulate the example set by the leading members of the Super-Secret Super League of Extraordinary Contractors. From the time he arrives on a project until the time he leaves, he remains productive and performs admirably. David possesses the willpower to withstand attic temperatures that would render an ordinary man unconscious, and the dexterity of an acrobat, which allows him to move in and through confined spaces with ease. This level of training in such a young man is just another reason for James to suspect the true identity of Damian to, indeed, be Batman. And by proxy, David must therefore, be Robin. David requires very little instruction, and quickly masters the use of any tool. When teamed up with the super strong neck of Happy the Neckropolian, the pair are a force of nature. Demolition jobs that should take many hours suddenly get completed in slightly fewer hours. With his natural quick intellect and work ethic instilled by his father, David will continue to grow into positions of responsibility within The League.

D'Artist, Dee the Creator, The Magnificent D, or just "D"... all are names that are ascribed to this mysterious man. Agent D is a masterful artist, and rapidly adapts to new environments and working conditions. Agent D does not possess super powers, but rather talents that have proven useful to the Super Secret Super League of Extraordinary Contractors. As part of a secret organization even more secret than the Super Secret Super League of Extraordinary Contractors, Dee has devoted his life to the protection of earth from alien and extra-dimensional being incursion. Only James, who is immune to memory altering technology, due to his constant wearing of sunglasses, possesses any memory of the appearance of Agent D. The rest of the team believe that Agent D appeared suddenly as if he were always there, but the truth is much more sinister. James, in an attempt to create a methodology and practical currency to enable him to actually care about the problems of others, inadvertently released an extra-dimensional being he had locked away long ago within his psyche, known as "Jay", an unpredictable and evil being comprised of raw emotion. Agent D arrived shortly thereafter to battle Jay alongside James. Using his magnificent powers of artistry and design, he assisted James in locking the being away, before he could truly be unleashed onto the world, within a physical prison known as "The One to Rule Them All". James carries The One to Rule Them All with him at all times to safeguard it from ever falling into the wrong hands. Agent D chose to remain at his side to learn techniques from James and the Super Secret Super League of Extraordinary Contractors, and to keep a watchful eye on James, lest he should ever be tempted to foolishly give The One to Rule Them All to another. 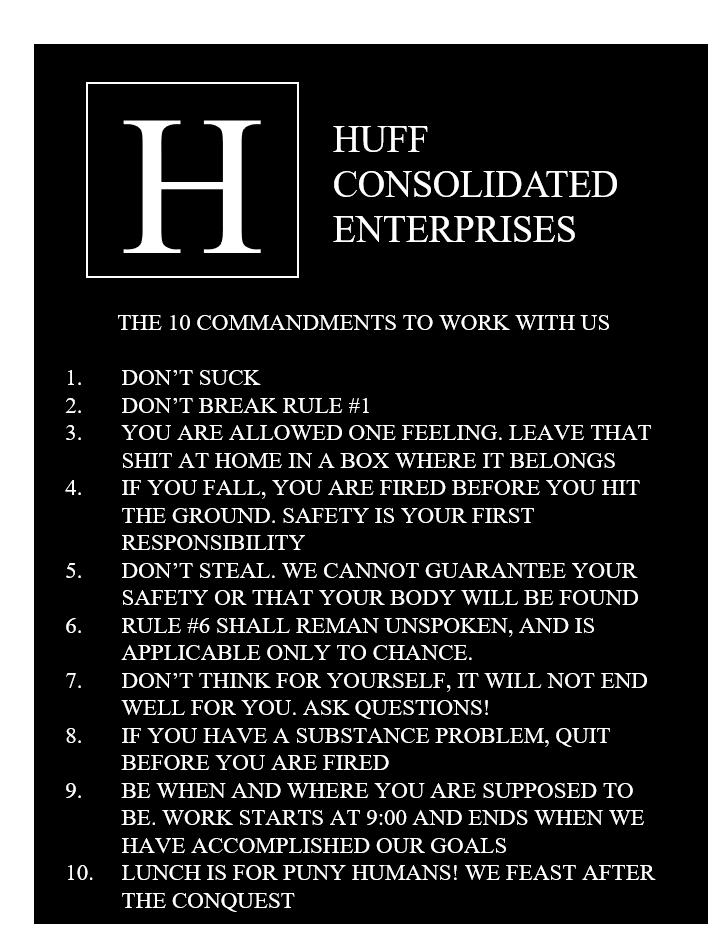